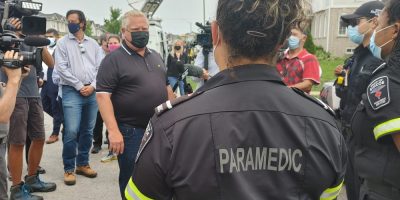 Premier Doug Ford was in Barrie to see firsthand the damage caused by an EF-2 tornado that struck the city Thursday afternoon. While here, he got to see how Barrie pulls together during tough times.

“I just met a family at the corner, I asked ‘do you live here,’ and they said ‘no, we’re here to help in any way we can.'” Premier Ford said following his tour of the area. “I get chills just talking about it because everyone pitches in.”

The outpouring of support began early and was most evident at Saint Gabriel the Archangel Catholic School; the location was used as a triage centre and was overwhelmed with donations of food, clothing, and other items less than 24 hours after the tornado struck. Despite this, Ford said the province is there if needed. “I just want to tell the people here that we’re going to have their backs… anything they need, we’ll be here.”

“Anything the city needs, we’re going to be there for them. Anything for homeowners that the insurance doesn’t cover, we’re gonna be here for them,” he added.

“I want to give a real shout out to the frontline first responders, as I always say they’re absolute heroes,” continued Ford. “I had a conversation with the CEO of Royal Victoria hospitals as well. It’s all hands on deck. There’s so much support coming in.”

Hundreds of homes were damaged by the tornado that struck before 3 p.m. Thursday, with up to 50 homes severely damaged. While eleven people were sent to hospital following the storm, only two remained as of early Friday afternoon.