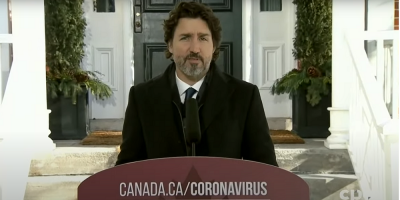 Prime Minister Justin Trudeau promised “tens of thousands” of COVID-19 vaccine doses this week in a Tuesday morning address that also saw new rules surrounding border crossings and some minor looking the other way on CERB.

“This week tens of thousands of Pfizer vaccine doses will be delivered to Canada,” said Prime Minister Trudeau on Tuesday morning. “In the coming weeks and months, we’re going to get even more doses even faster.”

“Next week marks the start of a major ramp-up in vaccine shipments starting on the 15. We’re expecting hundreds of thousands more doses each week. And that’s just from Pfizer. There are also other vaccine candidates currently in the approval process,” added Trudeau. “I can tell you we are still very much on track for tens of millions of doses into the spring and for everyone who wants to be vaccinated, vaccinated by September.”

The Prime Minister also used his time at the podium on Tuesday to detail a new measure being taken at Canada’s land border crossings. “As of February 15, when you return to Canada through a land border, you will need to show a 72-hour PCR test. Just like for air travel,” he said. “You can’t prevent someone who’s standing at a land border crossing from entering Canada because technically they’re already on Canadian soil when they’re speaking to that customs officer. That’s why what we can do is in cases of ‘no test to show’, apply a stiff penalty and demand and ensure a rapid and complete follow up to make sure that they are getting tested, that they are being properly quarantined, that they are not putting at risk the safety of other Canadians by returning home without a clear negative test.”

Meanwhile, Trudeau told Canadians on Tuesday that some will not have to pay back money granted to them through the Canadian Emergency Response Benefit (CERB). Those who applied for, and received CERB funding based on gross income instead of net income will not be required to pay that money back so long as all other CERB requirements were met.

Additionally, Canadians who received EI or COVID-19 financial aid benefits last year, and made less than $75,000, will have a full year to repay any 2020 tax debt, interest-free.