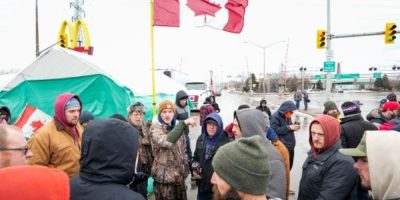 New warnings to stand down or face the imminent possibility of harsh consequences have been issued but protesters plugging roads around Parliament Hill as well as Canada’s busiest border crossing still show no signs of budging.

On Friday Ontario Premier Doug Ford declared a state of emergency that will allow his cabinet to impose $100,000 fines and up to one year in jail as punishments against people who continue to illegally block roads, bridges, walkways and other critical infrastructure.

Both Ford and Prime Minister Justin Trudeau warned the protesters, who are demanding an immediate end to all COVID-19 pubic health mandates and restrictions, that if they don’t go home the sanctions they face could ruin their lives.

A judge also issued an injunction giving protesters blocking cross-border traffic at the Ambassador Bridge in Windsor, Ont., until 7 p.m. Friday to clear out, however, the deadline came and went with the demonstrators both at the bridge and in Ottawa still vowing to stay put until their demands are met.

The bridge blockade has stemmed the flow of hundreds of millions of dollars in cross border trade, prompting entreaties from U.S. President Joe Biden and Michigan Governor Gretchen Whitmer for Canadian officials to reopen the crossing and staunch the economic bleeding that is now threatening the livelihoods of a huge number of people on both sides of the border.

Across Canada federal, provincial and municipal politicians of all stripes are calling for an end to the blockades that are currently in progress while also taking action to try to blunt the impact of new demonstrations planned for this weekend in a number of communities nationwide.

This report by The Canadian Press was first published Feb. 12, 2022.