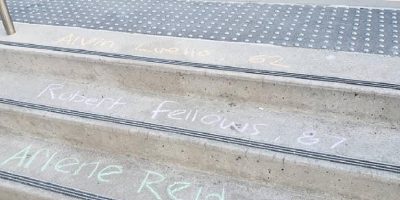 For the first time since lockdown demonstrations began over a month ago in Barrie, some of the noisemakers weren’t just in the crowd. Several individuals sat in their cars in a parking lot off to the side of Meridian Place blowing their horns, while another person on a rooftop blared what sounded like an air raid siren, as banners denouncing hate hung over the building.

The trigger for much of this was the appearance of Derek Sloan at Saturday’s anti-lockdown rally, the eastern Ontario MP who was kicked out of the Conservative caucus in January, a move party leader Erin O’Toole said at the time was due to a “pattern of destructive behaviour” that had become a distraction.

Sloan landed in hot water after he accepted a donation last year from a known white nationalist. Sloan said he was not aware of the donation previously, and when he learned of the contribution, he asked the party to return it.

The MP has also faced accusations of racism and homophobia.

Prior to the speech-making, the organizer of the rally read out the names of some people locally who had died of COVID-19, and he emphasized the demonstration was not anti-mask.

The horn blowing became too much for some of the protesters who approached police to complain. A woman walked toward one of the vehicles and coughed in her hands and then made a throwing motion at the cars.

Sloan told Barrie 360 that blanket lockdowns do more harm than they are worth.

“Targeted measures to help the vulnerable, let’s do it,” Sloan explained. “What the government is doing is bankrupting families, businesses and people’s futures.”

He said the Doug Ford government has had a year to increase hospital capacity, whether that is making field hospitals or converting gyms into treatment centres.

“Some hospitals are full and some are not,” said Sloan. “They are telling us in a province of 15 million that 700 or 800 people, depending on the day, are in intensive care units and it’s enough to shut the province down. Are you kidding me? What if we have a pandemic when 20,000 people need to be in intensive care? What are we going to do then?”

He suggested the government look at other ways to treat COVID-19, referencing treatment using vitamin D.

Sloan said the collateral damage from the lockdown is going to be extensive and is already.

“The Ford government needs to stop the lockdown and stop destroying the economy.”

Asked about allegations directed at him of racism and homophobia, Sloan said he loves all Canadians and doesn’t care what they are.

“We live in a society where if you stand up for anything then someone is going to hate you for it.”

Hours before the demonstration, names of some COVID-19 victims were written in chalk at Meridian Place, as well as messages urging people to wear masks and to love gay people. The messages were left untouched during the protest.

As people left the demonstration, police approached one woman in a parking lot who became confrontational when she was told she was going to be ticketed. The woman demanded police arrest everyone who attended the rally. She was eventually handcuffed when she refused to give her name. A small group of people yelled at officers as the woman was placed in a police van and driven away.

Later, the organizer of the rally could be heard telling those who confronted the officers that they were not being helpful by yelling at police.

Barrie police spokesman Peter Leon told Barrie 360 about 10 to 15 people at the rally received tickets for breaching Ontario’s stay-at-home order. The ticket carries an $880 fine. One person was arrested for obstructing police.

According to police, about 300 people attended the demonstration.