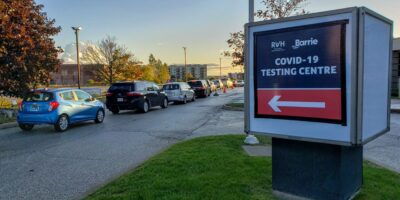 More restrictions are being put in place as the number of COVID-19 cases continues to mount.

To help combat the second wave of the virus, the Ford Government announced masks will be mandatory across Ontario as of 12:01 a.m. Saturday. That will include the wearing of masks in any public indoor space like while shopping or taking public transit, or while at work when physical distancing isn’t an option.

Additionally, the province has declared all assessment centres in Ontario will operate on an appointment-only basis, as of Tuesday. All walk-in testing will cease as of Sunday, so as to allow the province to process the backlog of testing.

There were over 90,000 tests waiting to be processed, according to Friday’s report from Public Health Ontario.

“The modeling we released this week demonstrates the absolute necessity to take action now to reverse current trends and protect our hospital capacity,” said Premier Ford. “With the weather changing and more people moving indoors, the decision to introduce new restrictions on restaurants, gyms and other businesses was difficult. However, we will do whatever is necessary, acting on the advice of our public health experts, to turn the tide on this second wave and keep everyone safe.”

The province is also imposing caps on capacities for bars, restaurants, and nightclubs in the three major hot spots in the province. Capacity will be capped at 100 patrons and no more than six people per table in food and drink establishments in Toronto, Peel Region, and Ottawa. Toronto’s government had already imposed this restriction before the province’s Friday announcement.

Queen’s Park is extending the pause on any further reopening of businesses, facilities, and organizations for another 28 days. The Ontario government continues to urge everyone to allow close contact only with people living in their own household and maintain a two-metre distance from everyone else.