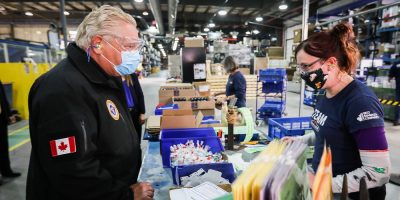 Premier Doug Ford was at Napoleon Home Comfort, an Oro Medonte-based manufacturer, to announce the creation of SupportOntarioMade.Ca, a site with over 4,600 products made by some 1,200 local manufacturers.

The site was launched in conjunction with the Canadian Manufacturers and Exporters (CME). It is expected to make it easier for shoppers to find made-in-Ontario products and support local businesses and manufacturers. “Ontario made products are second to none,” said Ford on Thursday. “Those who work in manufacturing are family, friends and neighbours. They make world-class products.”

While over 70 percent of Ontarians surveyed told the CME they already buy locally-made products, Premier Ford told Barrie 360 the site is still necessary as it lets consumers know they’re supporting their neighbours. “It really differentiates between supporting your neighbours, your friends and families, or supporting someone overseas. I like supporting friends, family and neighbors,” he told Barrie 360 over the phone. “I truly believe I’ve never seen patriotism run so high ever in my life here in Ontario and Canada.”

Ontario’s manufacturing sector directly accounts for over 12 percent of the province’s economy, with nearly $300 billion in annual shipments and $200 billion in exports.