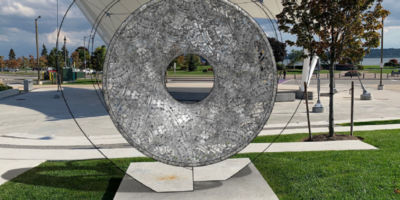 Meridian Place will see a new addition soon, in the form of a public art piece.

Titled Heart and Horn, the piece was selected by a jury to have a place at the downtown square, fabricated and installed by Hillsdale Sculptor John McEwen. The unique work of public art is in honour of Barrie native Bob Hunter.

“An exciting new public art project that will honor the legacy of Robert “Bob” Hunter, a prominent Barrie resident, who passed away in 1991, but not before envisioning a performing arts space much like the one we now have at Meridian Place.” reads a statement from the City of Barrie website. Known moreso for his skill with the trumpet, Hunter was also an active member of the Barrie community, including playing a role in the Barrie Chamber of Commerce and Rotary Club. Before his death, Hunter was also a strong advocate to have an outdoor facility on Barrie’s waterfront.

The project is made possible through a $50,000 donation from the Hunter family, with another fifty grand expected through private fundraising.

Barrie City Hall put out a public call for artists to submit proposed works over the summer, with nearly two dozen applicants whittled down to the six-foot-tall work seen above.