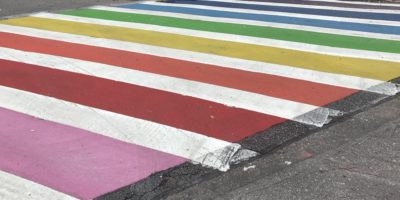 A rainbow crosswalk gets the final go ahead, while the taxpayer dollars that would have funded it will instead go towards other LGBTQ+ causes.

The rainbow paint will be laid at the Simcoe St. crossing that connects Meridian Place to Heritage Park at a cost of approximately $7,000, using privately-raised funds. It is expected this will take place before August 1st of this year.

Related: Somewhere Over The Rainbow Crosswalk

The initial proposal sought to pay for the crossing using taxpayer dollars. At last week’s meeting, several councillors questioned whether public money should be used for this purpose.  One of the councillors who questioned the financing went on to raise the money needed through private donation.

An amendment written by Councillor Keenan Aylwin and seconded by Councillor Mike McCann would see the $7,000 instead allocated to various unspecified LGBT-related causes and initiatives. The pair were at odds during the initial debate over the crosswalk, while Aylwin says the amendment is about meeting in the middle. “This amendment that Councillor McCann and I agreed upon, really is bringing us together, and I’m really encouraged by that. It makes me smile for sure.”