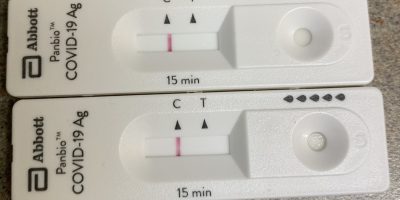 Medical Officer of Health for Simcoe Muskoka, Dr. Charles Gardner, said at a media briefing on Wednesday that voluntary tests will be in place when children return to school in January.

The reasoning behind this, said Gardner, is to help control and avoid further COVID-19 outbreaks to keep schools safe.

Ontario’s Science Table is recommending health officials implement voluntary rapid testing in settings such as schools and workplaces in areas that reach a certain level of infection.

In its latest briefing published on Thursday, the science table advised that public health units or neighbourhoods where new COVID-19 cases are near 35 per 100,00 people per week and where there is sustained exponential growth, carry out weekly voluntary screening of unvaccinated or partially vaccinated people in elementary schools.

The group said if new daily cases approach 175 per 100,000 per week in a health unit or area, then weekly testing is likely not frequent enough to reduce spread effectively.

“In that case, unvaccinated and partially vaccinated people should undergo rapid testing two to three times a week,” said the science table.

It added that public health units in that situation may also want to look into voluntary testing of fully vaccinated people at the same frequency.

The group also suggested health authorities in those areas could distribute rapid antigen tests in congregate settings and workplaces.

Gardner explained how the rapid antigen tests would be used in elementary schools.

“It’s meant for those who don’t have symptoms and don’t have a contact history of a known case,” he said. “If they have symptoms or contact history, they should be going to an assessment centre to get PCR testing instead of the rapid antigen testing. That would be a more appropriate and accurate means of determining whether or not they are a case.”

The science table said it considers rapid testing in elementary schools a priority since students under 12 in the province are not yet fully vaccinated.

Ontario is going to send a pack of five rapid antigen COVID-19 tests home with every school child in the province in time for the winter break, in a bid to keep infected kids from re-entering schools in January. The government has said 11 million of the tests will be handed out, enough for about the 2.2 million public school students in the province. Participation is voluntary and any child who does not take the rapid tests will be allowed to return to school when the holidays are over.

To date, the province has allowed rapid antigen testing for schools where all students were returning from a COVID-19-related closure. Dozens of mobile testing sites in high-traffic places such as malls and marketplaces will be set up during the holiday season. The government has resisted calls to implement regular asymptomatic surveillance testing in schools.

“It would help a great deal to safeguard the school environment to have as high a vaccination coverage as possible for all children attending school,” said Gardner.

The tests, which provide results in about 15 minutes, are also available for a cost of up to $40 at some pharmacies for travel and other asymptomatic uses.

In response to the science table’s findings, the province said it had distributed more than 34 million rapid tests as of Monday and deploys more than a million to workplaces, hospitals, and other congregate settings each week.