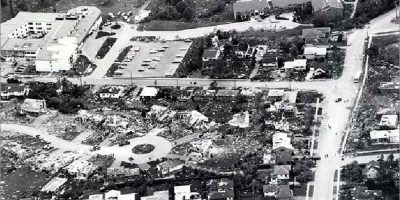 A series of tornadoes – one of which blasted through Barrie – ravaged parts of Central Ontario. Winds were clocked at more than 300 kilometres an hour.

Fourteen tornadoes swept through Ontario that day, in an age when predicting such storms was spotty.

Unlike today, there was no tornado warning. There was nothing in place that would allow Environment Canada forecasters to predict what was about to happen.

Today, they have specialized radar equipment designed to identify the kinds of storms that could spawn tornadoes; there are warning preparedness meteorologists, able to issue warnings of potential tornadic activity (such as last weekend when a tornado watch was issued, albeit briefly – for the Barrie-area; and there is sophisticated technology that can interrupt radio and television programming to issue an alert.

An EF-2 tornado ripped through south Barrie last July. The wind was in excess of 200 kilometres an hour. One hundred and ten homes were damaged; 71 were deemed unsafe.

When a Tornado Warning is issued it’s your cue to take shelter immediately, preferably in a basement away from windows.