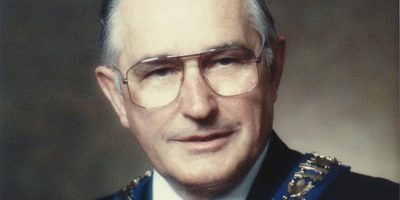 Details have been announced, of a service for Ross Archer. A service will be held for Barrie’s former mayor on Saturday, November 10th, from 12:00 to 1:00. It will be held at the Burton Avenue United Church. In lieu of flowers, it is asked that memorial donations be made to the Humane Society instead. Messages of condolence may be forwarded through adamsfuneralhome.ca.

Flags at Barrie City Hall will be flown at half-mast to remember former Mayor Ross Archer, who passed away Monday.

Archer was first elected as a City Alderman in 1968.

During his time as mayor, Archer helped lead the merger with Powerstream, while his work also saw the revitalization of the downtown and the extension of Centennial Park.

“We were saddened to hear of the passing of this significant figure in our city’s history. Ross’ accomplishments as mayor helped build Barrie into the city it is today.  Our thoughts are with his family and friends during this difficult time.”
– Jeff Lehman, Mayor, City of Barrie

“I am very sad to hear of the passing of former Mayor Archer, I had the privilege of working with him while he served as the Chair of the Barrie Public Utilities Commission while I sat on Council. He was dedicated to serving his hometown and had a large hand in developing Barrie into the city it is today. Ross was a decent man and it was an honour to know him.”
– John Brassard, MP Barrie-Innisfil

Former City of #Barrie Mayor Ross Archer, who served from 1977–1988, passed away on Nov 5 2018. To honour former Mayor Archer, flags at City Hall are flying at half-mast. https://t.co/3jr0zjmTb8 pic.twitter.com/aEu5eJCUmc