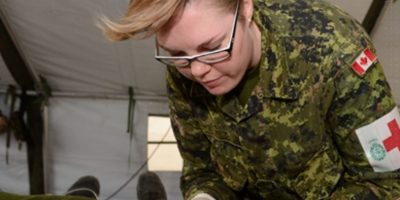 A report from the Canadian military, obtained by the Globe and Mail, suggests not all of the deaths at long-term care homes during the pandemic have been due to COVID-19.

Some, the report says, were due to dehydration and neglect, and could have been prevented with ‘water and a wipe down’.

The military stepped in last June when deaths at some long-term care homes began to spiral out of control.

At Downsview Long Term Care Centre, where one in four residents died of COVID, the report notes 26 others died from dehydration before the military arrived. It says a lack of staffing was to blame.

And at Hawthorne Place Care Centre, 51 of 269 residents died of COVID-19 However, the military suspects those fatalities pale in comparison to deaths from other causes, such as malnutrition and dehydration. When members of the Armed Forces arrived at the home, the report says, they found “feces and vomit” on the floors and walls, two residents with dried feces under their fingernails and management that was “non-existent.”

The military report comes on the heels of an independent commission report that was critical of the Ontario government’s response to the pandemic saying it was slow, not coordinated and lacking in urgency.

Government figures show 3,762 long-term care residents in Ontario have died of COVID-19. Long-term care deaths from other causes during the pandemic have not been tracked.