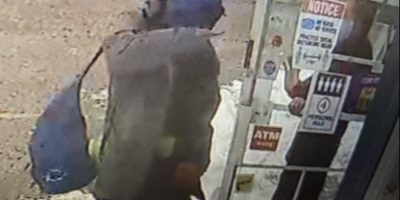 Barrie police have released surveillance video of a suspect wanted for the armed robbery of a convenience store.

Around 9: 30 a.m. on Wednesday, Jan.19, police say the owner of a convenience store near Bayfield and Sophia Streets saw a man taking items.

Police say the suspect flashed a weapon when he was confronted by the shop owner. The man fled with the items and was last seen running on Sophia Street.

The suspect is described as a white male with a medium build. He was wearing a blue hoodie, grey jacket, black snow pants and possibly carrying orange gloves

Anyone with information should email tplumpton@barriepolice.ca.