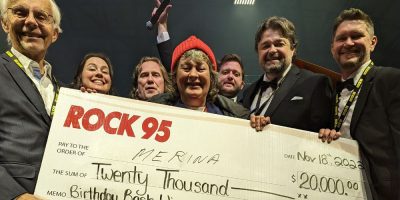 This past Friday, Rock 95 celebrated 34 years at their 2022 Birthday Bash. While it may not be a milestone birthday, the station’s ongoing success is something worth celebrating!

A Brief History Of Rock 95

It was fall of 1987 when a man named Doug Bingley was headed to Ottawa to attend a hearing at the Canadian Radio Television Commission (CRTC). His goal was to land a broadcast license for a new rock radio station that would hail out of Barrie, Ontario. Many believed it was a fools errand but Bingley was confident it would be a success.

Bingley and his partners were competing against 5 other bids for the license. They were hopeful theirs would win out but there was no way to know until the government made their final decision.

Bingley and his team spent the next 7 months building a radio station from scratch. They erected a transmitter tower 21 kms northeast of Barrie in Edgar and setup a broadcasting and production studio on the upper level of Kozlov Shopping Center. Signal testing began in early October and on October 7, 1988, Central Ontario’s first rock-based music channel was born.

Upon it’s launch, local residents and businesses were still skeptical about a rock music station. But Rock 95 eventually grew into the most listened to station in our area and a top 5 Canadian rock station.

Bingley secured a second broadcast license and began KOOL FM in 2002. In 2007 the two stations moved to Huronia Rd and in 2012 Bingley opened Indie 88 in Toronto.

Rock 95 has thrived over the years by sticking to its roots and celebrating the listeners, clients and employees that make the station possible. The annual Birthday Bash is just one of the many ways Rock 95 does this.

The Birthday Bash is “Central Ontario’s biggest party” and is a win-your-way in event. For this year’s event, the Sadlon Arena was transformed into a concert venue with performances by Sam Roberts Band and Monster Truck.

Attendees also had a chance to win over $100,000 worth of prizes, including (but not at all limited to) a:

We can’t wait to see what next year’s Bash brings! Happy Birthday Rock 95!