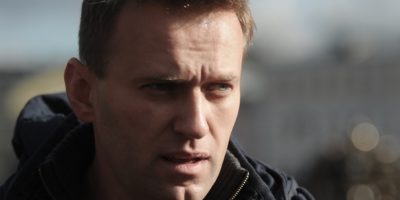 Moscow – Russian opposition leader Alexei Navalny, one of President Vladimir Putin’s harshest critics, was released Monday from a Moscow hospital after a mystery illness that his doctors say may have been the result of a poisoning. Navalny, who was arrested on Wednesday and sentenced to a month of detention for calling an unauthorized protest, was taken back to prison to serve out the rest of his sentence.

Navalny’s long-time ally and campaign manager Leonid Volkov called the dissident’s return to prison, “back to the same cell and the same bed,” with questions still lingering about his condition, “especially cynical.”

Navalny was hospitalized on Sunday, a day after massive anti-government protests in the streets of Moscow, suffering what appeared to be a severe allergic reaction. His spokeswoman Kira Yarmysh said on Twitter that the politician had severe facial swelling and a rash all over his body.

Olga Mikhailova, one of Navalny’s lawyers, came out of the hospital after visiting him on Monday prior to his release and told reporters that a panel of doctors had agreed a diagnosis of “poisoning by an unknown chemical substance.” Test results weren’t back yet, so it remained unclear what the substance might be.

Mikhailova did not make clear in her statement whether the group of doctors who issued the diagnosis included any of Navalny’s own physicians, nor whether she or the doctors believed someone might have intentionally poisoned Navalny or if he could accidentally have come into contact with a chemical substance while in detention.

Navalny’s private physicians, however, who visited the hospital on Sunday afternoon and briefly examined him, suggested the politician could have been deliberately poisoned.

“I am positive that… this is the damaging effect of unidentified chemicals. Alexei has never been allergic to anything. Moreover, he ate the same food all the other arrestees ate and did not use any new perfumes or personal care products,” Navalny’s long-time personal doctor Anastasia Vasilyeva wrote on her Facebook page Sunday evening.

She said doctors treating Navalny in the hospital didn’t try to identify the chemical and didn’t allow Navalny’s own physicians to help with the diagnosis or treatment. “Apparently, they don’t want anyone to know what really caused the condition,” Vasilyeva wrote. Enemy of the State: Navalny

Suspicion that the authorities could be trying to conceal what really happened to the politician were exacerbated late Sunday night, when the police arrested two dozen of his supporters who had gathered in front of the hospital.

Navalny’s sudden hospitalisation came amid what commentators have called the biggest political crisis in Russia since mass demonstrations in 2011 and 2012.

For the past two weeks, thousands have regularly and relentlessly protested in Moscow against the government’s decision to ban multiple opposition candidates from running in a September Moscow City Council election. There are 45 seats up for grabs. Police arrest 1,000 in Moscow during protest over exclusion of opposition candidates in city election

The ban on the candidates added to the growing list of things frustrating many Russians in recent years, including rampant claims of corruption and Putin’s decision to raise the public pension age by five years at a time when the economy is stagnating and incomes are dropping.

Police set a new record this past Saturday, detaining 1,400 demonstrators. But the biggest rally was a week ago, when more than 22,000 people took to the streets of the capital. Many of those detained sustained injuries as the police used batons and tasers.

The banned opposition candidates themselves were subject to home searches in the middle of the night, long interrogations, arrests and threats of criminal prosecution.

“Gas poured” on the fire?

The possible poisoning of Navalny only fuelled speculation that the authorities are desperate to quash the protests and keep them from getting any bigger.

Political analysts, however, believe that what happened to Navalny may only make things worse for the Kremlin.

“Our authorities are great at getting in trouble where there wasn’t supposed to be any. The theory about (Navalny’s) poisoning will start spreading now, and it will be very hard to refute it,” former Kremlin speechwriter-turned political analyst Abbas Gallyamov said in a Sunday night Facebook post. “It’s a new portion of gas poured into the fire of the protest.”

Neither the mass detentions nor the harsh crackdown by police on the protesters appear to have to have deterred Muscovites from protesting further.

As soon as last week’s demonstration was finally broken up late on Saturday evening, opposition candidates immediately called for another one this Saturday. As of Monday afternoon, more than 8,500 people had signed up to join the protest on Facebook. The previous week’s rallying cry on the social media platform garnered 10,000 signatories over the course of an entire week.