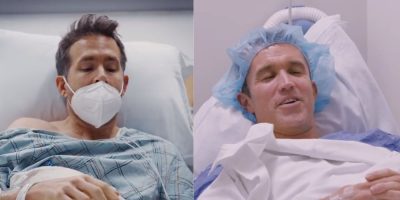 Actors Ryan Reynolds and Rob McElhenney went the extra mile to talk about the health of their bums.

The two friends and co-workers had recent colonoscopies and filmed the procedures.

Both actors are 45 years old and recognize the importance of getting it done, with doctors calling it the Gold Standard for colon cancer prevention.

In Reynolds’s case, they discovered an “extremely subtle polyp” which there were able to remove.

His Doctor explains, “This was potentially life-saving for you; I’m not kidding. I’m not being overly dramatic. This is exactly why you do this.”

Wrexham won by 3 today but I won by 2 and that’s still pretty dominant. @LeadFromBehind @VancityReynolds pic.twitter.com/pibCPNXTMU

In McElhenney’s case, he had three polyps removed, with his Doctor explaining that they weren’t anything to be concerned about, but it was extremely good timing to get them removed.

The video was done in partnership with “Lead from Behind,” a campaign that seeks to raise awareness about colorectal cancer.

Watch their journey below.