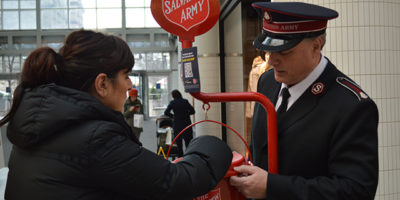 The Salvation Army’s Christmas Kettle campaign is underway in Barrie with the pandemic and rising costs for food and housing forcing more people to turn to the organization for assistance.

Major Stephanie Watkinson, executive director of the Barrie Bayside Mission, says they have a target this year to raise $625,000, the largest goal ever.

“But it’s a true reflection of the critical need in our community,” she says.

The Salvation Army has six kettle locations in Barrie and more will be added in December.

There were no physical kettles out last holiday season because of the pandemic.

Watkinson says not to worry if you don’t keep a lot of cash on hand. At every kettle location, there will be a tiptap machine. People can tap their credit card or their bank card and make a donation.

The Bayside Mission does a community meal twice a day, seven days a week, and Wilkinson says there are more people seeking the service.

“We are serving the population that is food insecure because they can only afford rent, and they can’t afford food. We are serving individuals and families.”

Despite the challenges, Watkinson says it is important to share success stories. Numbers up to October show 69 men and 18 families that were in the shelter program are now stabilized in homes of their own.

“During all the chaos of COVID, we are still housing people.”

People who want to volunteer for the kettles can contact Kelly at the Bayside Mission at 705-728-3737.