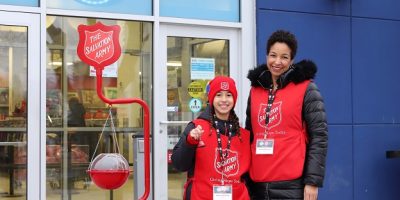 Those iconic red kettles the Salvation Army uses to collect money for our societies most vulnerable will be back at their usual spots this year despite the challenges stemming from the COVID-19 pandemic.

The Sally Ann kicked off the 130th Christmas Kettle Campaign Monday with a national fundraising goal of $23 million this year.

The campaign in Barrie will begin on Nov. 27 with a target of raising $600,000. Captain Stephanie Watkinson says due to COVID-19, the Sally Anne has cut the number of red kettles by more than half with only about 10 locations in Barrie this season compared to 23 in 2019.

The strain COVID-19 grasped Canadian families with has left the Salvation Army struggling to keep up with demand.

Canada’s most vulnerable are flocking to their food banks, shelters and other services like never before. To put it into context, the need for the Salvation Army hasn’t been as great as it is today since the Second World War.

The Salvation Army has seen a 19 per cent increase in the number of people who have visited this year because of delayed wages. Furthermore, people listing homelessness as their reason for visits has doubled since 2019.

“This year, we see evidence that the people we serve are struggling like never before,” said Lt-Colonel John P. Murray, spokesperson for The Salvation Army. “We refuse to let the pandemic steal their Christmas joy. That’s why The Salvation Army is providing those in need with food, shelter and other essentials. We need the help and support of Canadians who can donate more now than ever.”

Murray says that target is 10 per cent more than in previous years — even though the charity has received five times the normal number of requests for help since the pandemic began.

“We’ve not seen the increase in in demand for assistance like this since post-World War Two,” Murray said. “That’s incredible when we consider that.”

You can donate to the Salvation Army Christmas kettle campaign here, FilltheKettle.com.