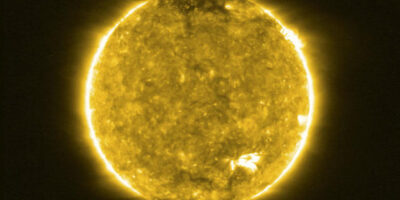 The European Space Agency and NASA unveiled the first images captured by the $1.5 billion Solar Orbiter spacecraft Thursday, stunning photos revealing spectacular detail and providing a possible answer to a long-standing question: what heats up the star’s outer atmosphere, or corona, to millions of degrees?

“It’s a little counter-intuitive because you would think, if you had a body that’s very hot at the centre and relatively cool at the surface, it would be even cooler the farther you go away,” said Daniel Müller, ESA’s Solar Orbiter project scientist.

“But on the contrary, for the sun we have a hot core (and) a relatively cool surface surrounded by a super hot atmosphere of more than a million degrees. It’s as if you would light a fire and as you move farther away from the fire, it doesn’t get cooler, but in fact it really starts to burn you when you’re really far away.”

The Solar Probe’s Extreme Ultraviolet Imager, however, captured stunning images from a distance of about 48 million miles, about half the distance between sun and Earth, showing what appear to be countless miniature flares, dubbed “campfires,” blazing away near the sun’s surface.

“It’s too early to draw any scientific conclusions, but our conjecture is these campfires … are related to changes in the sun’s magnetic field, a process known as magnetic reconnection,” Müller said during a news briefing. “We believe that even though it’s the ‘quiet’ sun, and there are only small scale magnetic fields, these filaments do get tangled and get under stress. And like rubber bands, they can eventually tear and then reconfigure into new configurations.”

That magnetic tearing can release enormous amounts of energy “that would then heat the plasma locally to temperatures of more than a million degrees,” he said.

The American physicist Eugene Parker, the man NASA named its own solar probe after, first theorized that a sea of small, magnetically powered “nanoflares” could be the mechanism for heating up the corona.

“While we clearly do not know yet if what we see is in any way related to that theory, there is the possibility that what we see here … could contribute significantly to heating the solar corona,” Müller said.

Along with the campfire images, ESA also released full-disc photos and data from the spacecraft’s other instruments showing an extraordinary level of detail that provides a taste of things to come: in about two years, the Solar Orbiter will pass within a quarter of the distance between Earth and sun.

As for the initial batch of observations, David Berghmans, principal investigator of the Extreme Ultraviolet Imager at the Royal Observatory of Belgium, said he was stunned.

“When the first images came in, the first thought was this is not possible, it can’t be that good,” he said. “It was really much better than what we dared to hope for.”

Launched from Cape Canaveral Feb. 9 atop an Atlas 5 rocket, the Solar Orbiter probe was designed to provide the first detailed look at the sun’s poles, joining NASA’s Parker Solar Probe, launched a year-and-a-half earlier, in a major push to answer long-standing questions about the star’s structure and behaviour.

The Parker Solar Probe periodically flies through the outer regions of the sun’s corona, enduring extreme temperatures that rule out the use of sun-facing cameras.

The spacecraft’s instruments instead are focused on studying the sun’s complex electric and magnetic fields, the electrically charged particles making up the supersonic solar wind and the mechanisms that heat the corona.

The Solar Orbiter will fly inside the orbit of Mercury in a highly elliptical orbit that eventually will carry it within 26 million miles of the sun.

“Parker Solar probe is going closer to the sun, much closer, but the environment that close is extremely harsh,” said Holly Gilbert, NASA’s Solar Orbiter project scientist. “They have one camera that’s not facing the sun, it’s facing away so it can watch the solar wind. So Solar Orbiter is (at) the limit of where cameras can take images of the sun itself.”

The Solar Orbiter mission cost roughly $1.5 billion, including the Atlas 5 rocket provided by NASA. The U.S. space agency spent another $70 million building one of the spacecraft’s instruments and other components.