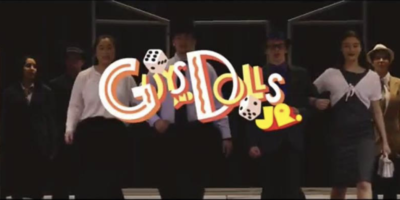 Have you ever seen a musical or been interested in seeing one?

The hardworking cast and crew are committed to giving their audiences a memorable performance. They have been rehearsing since the beginning of September and every day feel more confident and recognize how far they’ve come.

Every school day, Monday – Friday, the Musical Theatre class spends two periods (2½ hours) rehearsing for the musical. They also rehearse some days after school to ensure the musical is the best it can be and reflects everyone’s love and passion for all things St. Pete’s! There is a 19-hour weekly commitment for everyone involved!

One of the most committed cast members, P. Valdez, answered some questions about the upcoming musical. “It can be stressful at times, playing one of the main characters, and the rehearsals can be tough when not everyone can make it.” She continued, “I am working hard to find ways to incorporate my character’s mannerisms into my own and I’m finding a lot of similarities between us.”
Recognizing that communication is one of the keys to the musical’s success, the class has created a private SnapChat group to discuss issues and problems, and of course, fix things that need fixing!

Guys and Dolls is a musical live production from the hit movie made in 1955 and is based in the 1930s. Nathan Detroit, a gambler who sets up crap games for other gamblers needs $1,000 to rent a place for his crap game but needs to find a way to get the money. Nathan decides to bet a hard-hitting gambler, Sky Masterson, $1,000 that he could not take the beautiful mission doll Sarah Brown on a date in Havana. Meanwhile Nathan’s longtime fiance Adelaide is trying to get the distracted gambler off of gambling and focus on finally tying the knot!

It’s remarkable how close the cast and crew have become since beginning rehearsals in September. Even the two main characters have developed their acting skills to the point where their on-stage romance is completely believable! One of the main characters J. Tianov has been in previous musicals and said this, “I love the challenge of this role. I have never played a character in their 30s. Remembering lines for this show has been challenging but it always is. Helping people is also difficult for me because I have never been in a show where I have had to teach people things.”

St. Peter’s Catholic Secondary School is performing Guys and Dolls Jr., on December 6 at 7 p.m., December 7 at 7 p.m. and December 8 at 2 p.m. and 7 p.m. Tickets are just $10 for students of St. Peter’s Catholic Secondary School, $15 for adults, and families of 4 for $45. Don’t miss this wonderful opportunity to see a great musical production – the next one won’t happen for another two years!