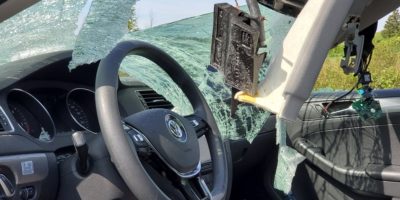 A Barrie woman has been airlifted to a Toronto trauma centre after her car was struck by a wheel that had flown off another vehicle, while police say she will make a full recovery.

The OPP say a vehicle travelling northbound somehow lost a wheel, which bounced into the southbound lanes, striking a vehicle as it approached Highway 89 near Cookstown.

All lanes of the 400 were shut down shortly after the morning rush so that an air ambulance could land to transport the 29-year-old woman to Toronto. OPP Sgt. Kerry Schmidt says she is expected to make a full recovery, that her injuries are not life threatening.