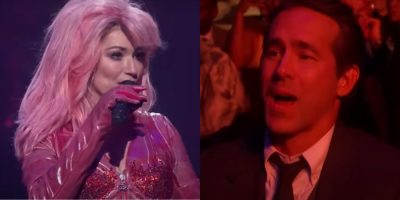 Shania Twain has booted Brad Pitt from her hit song “That Don’t Impress Me Much.”

Ryan Reynolds took the famous spot in the line that originally went, “So You’re Brad Pitt… That don’t impress me much.”

The country star performed the updated version of the 1997 song during the People’s Choice Awards on December 6.

Even Ryan Reynolds was taken back with the lyric change, visibly blushing as he mouthed, “Oh my god, me?”

He later reacted to the change on Instagram stories, saying “This might be the best thing to happen to me.”

That night Twain also performed her other hits including “Any Man of Mine,” “Man! I Feel Like a woman,” and he new single “Waking Up Dreaming.”

It was a big night for her as she received the People’s Choice Music Icon Award.

During her acceptance speech, she said, “The biggest honour for me is knowing that people have somehow found strength and inspiration in what I have to say in my work, so thank you. I love you for that.”

Reynolds accepted the People’s Icon trophy that night and delivered a heartfelt speech thanking his wife Blake Lively and his three daughters.

“Blake and my girls, you are quite literally my heart. You’re my hope, you’re my happiness. I joke that my family exhausts me, but in reality, you give me more strength than any man could possibly deserve.”