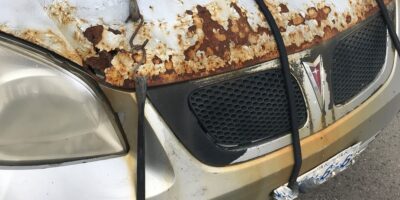 A Shelburne man is up on charges after Caledon OPP say some odd steps were taken to hold the whole vehicle together.

Police say a vehicle was stopped after it appears bungee cords were used to hold the vehicle’s frame together in spots. A cursory glance at the cords shows they were on their last legs as well, according to images released by Caledon OPP detachment.

A 48-year-old man has been charged with operating an unsafe vehicle.