Two men are up on a slew of charges after a shoplifting call led police to recover a stolen vehicle.

Just after 1 p.m. Wednesday, police were called by the employee of a store on Murphy Road, reporting two men just took off with a number of items without paying. Police were told the pair fled in a grey Audi SUV.

Officers weren’t far from the scene as it was, and were able to quickly locate the suspect vehicle near Highway 12. The two suspects allegedly fled on foot but were taken into custody a short distance off. Police say that’s when they discovered the vehicle was reported stolen and the plate attached to it didn’t belong there.

A 42-year-old man from Toronto and a 32-year-old from Vaughan face charges including theft, resisting arrest, possession of stolen property, forgery, and probation violation. 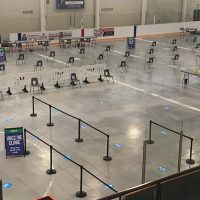