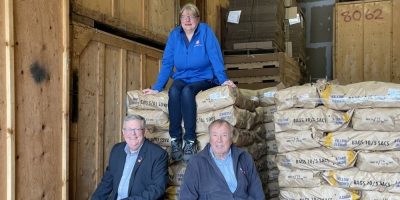 Over 66,000 lbs (or six thousand 10-pound bags) of P.E.I. potatoes are headed to local food programs throughout the Simcoe County area.

Millions of pounds of potatoes were scheduled for unnecessary disposal due to an export ban placed on P.E.I. potato farmers in November 2021.

Though, what was a negative, quickly turned into a positive.

The Government of Canada and Second Harvest Food Rescue partnered with organizations like the Rotary Club of Barrie-Huronia to link the distribution of the potatoes to associations looking for food donations, like Barrie’s Salvation Army – Bayside Mission.

The first shipment arrived in Simcoe County on March 31, with Rockbrune Bros Movers Barrie serving as the local distribution hub for the potatoes.

Major Stephanie Watkinson, Executive Director of The Salvation Army – Bayside Mission, says the opportunity to receive a food source like the potatoes is amazing, as they serve community meals twice a day – in March alone they gave out over 16,000 meals.

“A donation of potatoes really helps with the cost of those meals,” Watkinson told Barrie 360. “With food costs going up, our budget is exploding to cover the needs. This donation is really helping us out with that staple item.”

Watkinson also says the Salvation Army is trying to push more nutritional meals full of protein and vegetables, and the potatoes will help with that avenue.

Stephen Wilkinson, Immediate Past President of the Rotary Club of Barrie Huronia, says the initiative has worked out on multiple fronts.

“It really is a win, win, win,” said Wilkinson. “It’s great for the farmers, it’s great for the end-users and the organizations because it’s been a very challenging few years. There have always been food insecurity issues, but particularly right now, it’s a great opportunity.

Watkinson says the potato supply is a windfall gain that came out of nowhere, but the bigger issue needs to be tackled.

“We’re hoping that we can not only meet the needs, but start addressing the issues of food insecurity and really find solutions,” said Watkinson.

“Because the community meal is not a solution. It’s just the band-aid till we find a solution of how people can have enough funds to support themselves.”