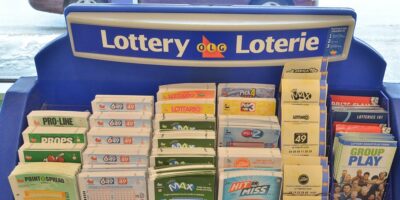 There have been some recent big wins across Simcoe County of late, courtesy the OLG.

Congrats to Manuel Migone of New Tecumseth, who raked in $100,000 off an Instant Hot Card scratch and win ticket. Congrats to his three kids and seven grandkids, too. “I feel good that I get to share this with the people I love. My daughters, my grandchildren – everyone is getting a cheque!”

Bingo! Paula Boutilier’s bad day turned right around after a friend came by to cheer her up with a coffee and an Instant Bingo Doubler ticket. The mother of two instantly won $100,000. She’ll share some of the winnings, but is also planning a trip somewhere. “It’s so exciting. My mind has been going a mile a minute trying to figure out how to enjoy my winnings. I have so much freedom of choice,” she concluded

Janet Hembruff of Penetanguishene had to do a triple-take when she won big on an Instant Monopoly ticket. The 67-year-old retiree thought she scored a modest win at first. “I thought it was a $25 win, then a $250 win, and then I realized it was $250,000 – I couldn’t believe it,” she shared while at the OLG Prize Centre in Toronto to pick up her cheque. “It’s an amazing feeling!”

A handful of scratch and win tickets seemed to Angela Cantwell of Innisfil as a good way to stay entertained while stuck at home during the pandemic. “I bought three tickets – the first won $10 instantly, the second had a Spin which won $10 and the third also won a Spin prize,” the grandmother of five said, “I thought the Spin landed on $150 but the cashier told me I won $150,000! It was unbelievable,” she smiled.

Finally, saying “yes” to ENCORE paid off for Gregory Woolner of Rosemont. Gregory matched the last six of seven ENCORE numbers in exact order in the April 11, 2020 LOTTO 6/49 draw to win $100,000. “The words Big Winner appeared, and I couldn’t believe it,” Greg said, having discovered he won big while using the OLG’s lottery app. “I’ve been racking my brain since the win trying to figure out what to do with the money. It’s a balance of fun and responsibility,” he added.