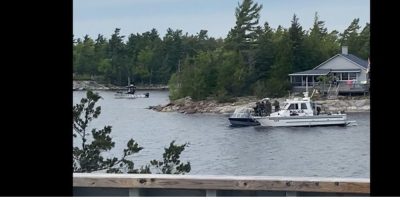 Earlier on Saturday, police tweeted that boaters should avoid Freddy Channel, located north of Beausoleil Island, in Georgian Bay Township for an ongoing investigation involving a man in a small boat, and that the public should avoid the area and not approach the male for public safety.

The Special Investigations Unit said in a news release on Sunday that police became aware of a man on a boat in Georgian Bay who was in possession of firearms. Officers with the OPP marine unit and a tactical team located the 72-year-old, and an interaction ensued. The SIU said officers discharged their ARWENs in the direction of the man, and he was taken into custody. He was transported to hospital but was not diagnosed with a serious injury.

The SIU’s mandate was invoked because a police officer discharged an ARWEN, which is classified as a firearm. Under the Special Investigations Unit Act, a firearm is defined as a barreled weapon from which any shot, bullet or other projectile can be discharged and that is capable of causing serious bodily injury or death to a person.
The SIU is urging anyone who may have information about this investigation, including video or photos, to contact the lead investigator at 1-800-787-8529 or online at: https://siu.on.ca/en/appeals.php