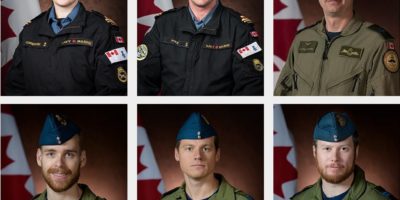 There were 6 Canadian soldiers onboard a Canadian military helicopter that crashed in the Mediterranean Sea on Wednesday.

Prime Minister Justin Trudeau offered his deepest condolences on Thursday saying “this is another very hard day for Nova Scotia and Halifax.”

“The men and women of the Canadian Armed Forces stand tall today… they do what they always do… step towards danger, so the rest of us can stay safe,” said Trudeau.

Officials say one body has been recovered, and five remain missing.

Sub.-Lt. Abbigail Cowbrough of Nova Scotia, originally from Toronto, was killed in the incident. Her father Shane Cowbrough confirmed this in a post on Facebook.

“I am broken and gutted. Today I lost my oldest daughter Abbigail Cowbrough in the crash involving the Cyclone from HMCS Fredericton. There are no words. You made me forever proud. I will love you always, and miss you in every moment. You are the bright light in my life taken far too soon,” wrote Cowbrough.

Cowbrough was a member of the Regal Heights Baptist Church in Dartmouth. The church posted a picture of Cowbrough Thursday morning, saying it was “heartbroken” to have lost a “wonderful young woman.”

Sajjan says both the cockpit and flight data recorders have been recovered and a flight is being sent to recover these recording and to bring them to the National Research Centre in Canada for analysis.

Chief of the Defence Staff General Jonathan Vance says the helicopter was taking part in a training mission and it was not ‘shot-down’. Vance says the cyclone was heading back to the ship and around 6:52 pm the ship lost contact with the helicopter and a few minutes later flares were seen. He said search and rescue efforts were launched immediately. He adds that he’s grateful to our NATO allies for their support.

General Vance says this is a time of agony for family and crew members.
Vance says approx 240 military members left Canada in January 2020 and they had just marked their 100th day on operations and were supposed to come back to Canada in July.

NATO released a statement confirming the Cyclone Sikorsky CH-148 helicopter, based on the Canadian frigate Fredericton, crashed while operating in waters between Greece and Italy.

“Standing NATO Maritime Group 2 ships and their associated air assets from Canada, Italy and Turkey are supported in their search operations by Allied maritime and air components from Greece, Italy, Turkey and the United States. HMCS Fredericton is a unit of Standing NATO Maritime Group Two (SNMG2) and had recently sailed from Souda, Greece to continue with their mission of maritime situational awareness in the Mediterranean. SNMG2 performed several exercises with units of the Turkish Navy followed with exercises with the Hellenic Navy and Air Force this past week. Details about personnel on board the helicopter will be released in accordance with national procedures,” wrote NATO officials.