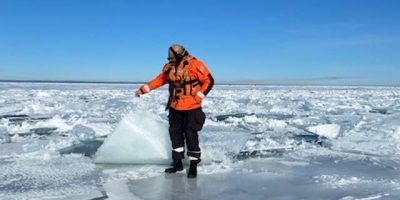 All is not as it appears on Lake Simcoe despite the ice cover.

Provincial police on Tuesday afternoon updated an alert to snowmobile riders to stay off Lake Simcoe. Aerial footage tweeted by the OPP shows open water due to cracking and shifting of ice.

Here’s the current aerial view of Lake Simcoe provided by #OPPAviation. It shows how EXTREMELY DANGEROUS open water conditions are due to cracking and shifting of ice. Stay safe, keep off the ice. #NoIceIsSafeIce ^in. pic.twitter.com/4pkghaXnXq

Earlier on Tuesday, Orillia OPP said they had received reports of ice breaking up in areas travelled by snowmobiles near Hawkestone. Police are reminding riders to always follow marked trails, and if you are going to go out on ice, to be sure to check conditions and have the proper safety gear.

Police tweeted a photo of a shelf they said spanned several hundred metres northeast from Jackson’s Point near Georgina Island. They said the ice was 4′ high and very hard to see, making it dangerous for people riding snowmobiles.