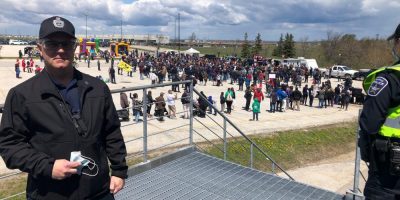 As fed up as the weekly protesters in Barrie are with government COVID restrictions, many others as just as fed up with the fact the protests are allowed to continue. They wonder why the city has not taken action to shut the protests down, and why police have not handed out more tickets.

Barrie Police Corporate Communications Coordinator, Peter Leon, says while the protests have been deemed illegal there’s a lot that needs to be taken into consideration, “Primarily the safety of the people that are attending these unlawful events. We know there’s the potential for serious incidents that could take place, we want to ensure that people that do attend, are able to arrive and depart safely. And that’s our primary focus, we’re looking at the management of the crowd itself.”

And tickets are being handed out. Several were written up this past Saturday. Each comes with an $880 fine (a set fine of $750 plus court costs). Summonses have also been handed out to individuals “who we’ve dealt with over the last number of weeks on a continual basis” which require the recipient to appear before a Justice of the Peace to explain themselves, and could result in a tougher penalty.

Leon also notes police have been taking stock of others in the crowd, “We will continue to lay charges based on the fact that we’re recognizing people that are here in the crowd. And we can certainly visit them at their homes or businesses and charge them at a later date.”