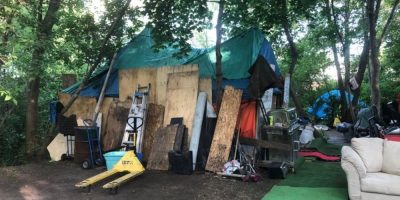 Homelessness, addiction, affordable housing, mental health – a lot of nuts and bolts wrapped up in an eight-part motion approved by Barrie city council on Monday.

Prior to the approval, council heard from several speakers who expressed concern that the issue of poverty was being criminalized.

Mary Anne Denny-Lusk, of the Simcoe County Alliance to End Homelessness, said discomfort with witnessing fellow humans suffering should not be conflated with legitimate concerns for one’s safety.

Sarah Tilley, a harm reduction manager at The Gilbert Centre, a not-for-profit that provides support to the LGBTQ population and those infected with HIV, said there is a dire need for housing that is safe, affordable, sustainable and accessible.

“Since housing is unattainable for so many, it does not matter who you ask to make this problem go away. This will not change whether that be shelter workers, the police, outreach workers or anyone else,” she said. “Until we have places for people to go, we are not going to be able to address people living outside, nor are we going to be able to curb the things that people do to survive.”

The motion replaces one proposed by Coun. Mike McCann last week in which a pilot program be considered to try and end panhandling, prostitution and drug dealing to create a safer downtown. The proposal went as far as to look at using a private security company or paid duty police officers from July to October.

The motion that was approved at Monday’s meeting:

One of the sticking points at last Monday’s general committee meeting was a proposal to address the safety of Highway 400 ramps where people panhandle and some have established encampments. It was the worry of some councillors that this might be the trigger for police to clear them out.

The change proposed by Coun. Keenan Aylwin that was approved requests the OPP to connect with outreach workers in Barrie.

“I think we’ve discussed the worries and the risk of reaching out to the OPP and that maybe we’ll see people be criminalized and displaced. Along with Coun. Natalie Harris, we have talked about how there are real safety concerns,” Aylwin noted. “We wanted to find an approach that really communicates what city council is looking for, and we want outreach workers to be the main point of contact for vulnerable people living in these areas, and we want to see a compassionate approach and not just purely an enforcement approach to these issues.”

Coun. Sergio Morales said concerns about the safety of individuals and motorists still needed to be addressed, and it wasn’t with this plan.

“My intent is not to make myself blind to the reality of panhandling, both the fact that it’s not what anybody should be doing, and it’s what they have to do,” he explained. “There’s a bigger picture that says specifically for Highway 400 ramps, it’s not the place for them to do it. It’s not safe for the people panhandling or for people in vehicles.”

“We know that the accumulation of debris and waste is one of the main concerns,” Aylwin said. “We know it’s not an ideal living situation, but people don’t have any other options right now. There are actually only a small number of locations which pose a significant issue.

“These encampments aren’t going anywhere anytime soon because there’s no alternative at the moment. We’re in a housing crisis,” he added.

Coun. Robert Thomson was not sold on the idea.

“We’re going to need rollup trucks to provide this service. There’s encampments all over the city,” he said. “We can’t put garbage bins all over the woods.”

Mayor Jeff Lehman warned that the bigger picture that needs to be addressed is more than just the housing crisis, which he said was the underlying issue.

“But the lack of support for the reasons why people are experiencing homelessness in the first place, and that is poverty, mental health and addictions, and in some cases past trauma and physical trauma,” he said. “Until we have the services available in our community to support the reasons why people become homeless, it won’t just be enough to get a roof over people’s heads.”

The mayor also touched on the emergency motel model that is to end on June 30 that has provided shelter to the homeless during the pandemic for clients of The Busby Centre and the Elizabeth Fry Society. Both agencies have said without a solution, there could be as many as 150 people without shelter by the end of the month.

Lehman called it a “pending tragedy.”

The County of Simcoe provides funding to shelters in Barrie, and city staff said at Monday’s meeting that work is being done with service agencies to find overflow solutions, as well as speaking with the province about the challenges associated with an end to the funding.

“My fear is, as we sit here tonight, is that a month from now I’ll be calling a special meeting of council to address the fact we have a huge influx into our community, into encampments, into informal living conditions into the downtown and elsewhere because there is a sudden end to the funding model, which has provided at least temporary homes for so many individuals,” said the mayor.