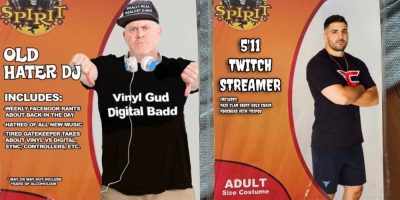 The fun-natured folks at Spirit Halloween are busy after a series of made-up costumes are making the rounds on the internet.

For fun, people have been creating their own Halloween costume meme, with the Spirit Halloween logo making it look legit.

Some are hilarious and in good fun. Like this one called ‘Old Hater DJ’

The problem is, not everyone can tell the fake ones from the real ones, leaving the company to deal with complaints. Such as this controversial “Gay Guy”

The company recently got pushbacks for something they had nothing to do with. They’ve explained that they have never carried the costume.

This is not an officially licensed costume from our company. Photoshopping our packages seems to be trending at the moment.

That being said, the store is also having some fun with the trending meme by creating its own. The Spirit Halloween Store.