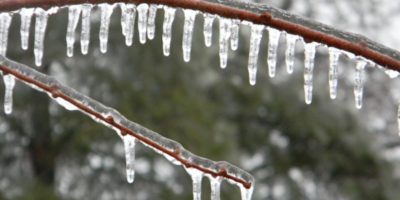 Back on Tuesday, Environment Canada put out the first alert about a significant storm for this weekend.

The worst of the ice accretion has been in higher elevation communities such as Caledon, Shelburne and Mount Forest, and where Hydro One is dealing with the most power outages.

Many scenes like this around The Shelburne area this morning. #ONStorm pic.twitter.com/me2A3iMdlN

In our area, there was localized flooding in parts of Barrie, but the worst of the worst was in the community of Belle Ewart in Innisfi.

Operation Teams working hard, the pumps are too, pumping water out of the affected areas. This is Maple and Belle Aire Beach Rd. A reminder to avoid flooded areas and roadways. Thank you for your patience. pic.twitter.com/cj7SqmZqzk

Due to the extreme weather, Mount St. Louis Moonstone and Snow Valley are closed today, while start up could be delayed at Blue Mountain.

Weather conditions will gradually improve as the morning moves along.

Salters and sanders have been out all night trying to keep up with the storm. Either way, motorists will need to use extreme caution because of the icy conditions. A blanket of snow on some roads is just hiding the ice underneath.

One blessing in all of this is that it’s Sunday, so traffic volume is much lighter.

By the numbers from Environment Canada: