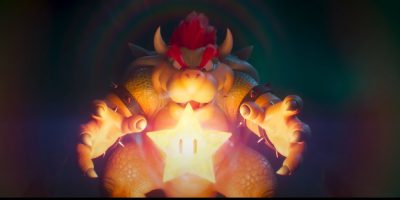 “Everyone, gather around the TV, they released the Super Mario Bros Movie trailer.”

Those words were spoken at my house yesterday, followed by everyone running to the living room to watch the 2.5-minute teaser trailer for the highly anticipated movie.

We first see Bowser, “King of the Koopas” and his Koopa troop, who trembles in fear of him.

He’s taken over the mushroom kingdom, and after the blue penguins unsuccessfully attempt to stop him, Bowser asks, “who’s gonna stop me?”

A post shared by The Super Mario Bros. Movie (@supermariomovie)

Enter our beloved Mario. He enters the mushroom kingdom looking dazed and confused until the adorable toad greets him.

In the last few moments, you see a frightened Luigi being chased by Dry Bones.

Related: Chris Pratt talks about voicing Super Mario, says it’s unlike anything you’ve heard in the Mario World before

It’s expected out on April 7, so we have a long wait. However, the studio says they plan on gradually releasing more trailers in the build-up to the film’s release.

Have a look below.