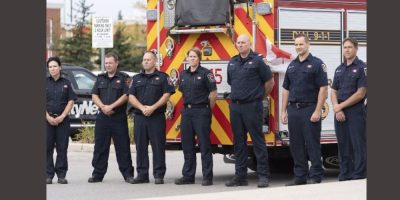 The suspect in a string of shootings that killed a Toronto police officer and an auto shop owner this week had an extensive criminal record, including ties to a gang at one point.

Parole Board of Canada documents indicate that the man believed to be behind Monday’s shootings in the Greater Toronto and Hamilton Area had a history of robbery, drug trafficking and weapon possession, as well as gang ties.

The Special Investigations Unit has not released the suspect’s name because they say his family has not provided consent.

Peel Regional Police originally identified the suspect as 30-year-old Shawn Petry in its provincewide emergency alert on Monday, which warned the public of an “active shooter, armed and dangerous.” Sources close to the investigation, who aren’t authorized to speak publicly, have since identified the man as Sean Petrie, 40.

The SIU has said four police officers shot at Petrie later on Monday and he died after a confrontation in a Hamilton cemetery.

Parole board documents for a Sean Petrie with the same date of birth as the suspect in Monday’s shootings indicate the man was in prison in 2010 – the location is redacted in the parole documents – under medium security and subject to statutory release.

“Your offence cycle as demonstrated by your criminal history is directly linked to the negative influence of criminal others, including those involved in the gang subculture,” the board wrote on Aug. 17, 2010.

“Your involvement with these associates has led to your convictions for property crimes, robbery, drug trafficking, and weapon possession.”

The board said Petrie scored a -3 on the Statistical Information on Recidivism scale, which it said means “1 out of 2 offenders will not commit indictable offences after release.”

The board imposed a number of conditions on Petrie’s release. Those included no contact with any gangs, including anyone affiliated with a particular gang. The gang’s name was redacted.

In order to prevent him from associating with that gang, the board banned Petrie from entering a swath of northwest Toronto “where the preponderance of your criminal activity has taken place.”

The board also imposed a condition that he abstain from buying and taking non-prescription drugs.

“You have displayed a comfort with possessing cocaine and other narcotics for the purpose of trafficking,” the board wrote. “There is also an indication of regular marijuana use that is not advantageous to your rehabilitation. You have refused institutional drug screening resulting in sanctions.”

Petrie had completed of violence prevention programming “with some gains” and the board noted he had support from his girlfriend and siblings at the time.

The parole board also imposed “enhanced supervision” due to “negative institutional conduct.”

Petrie also had to find work as a “key plank” of his release into the community.

“You will require assistance in this area given most of your past abilities to garner money were illegitimate,” the board said.

The parole board said Wednesday that Petrie’s statutory release was by law and not a decision by the board.

He was to follow a set of conditions for a period of time in order to complete his sentence, which he did on June 19, 2012, the board said.

“The risk assessment that was conducted in order to make this decision was based on the offender’s behaviour at that time,” the board said.

Petrie was not serving a federal term of imprisonment at the time of this week’s shootings, the board said.

Police allege the suspect in Monday’s shootings launched an “unprovoked” attack on Const. Andrew Hong at 2:15 p.m. as the officer ate lunch inside a Tim Hortons while on break from a motorcycle training session in Mississauga, Ont.  Another person was shot in that location.

The suspect then went on to shoot and kill the auto shop owner, Shakeel Ashraf, 38, and injure two others in Milton, Ont, before fleeing again.

Sources say a chase then ensued along the highway, which eventually led to the Hamilton cemetery around 4:30 p.m., where the suspect died.