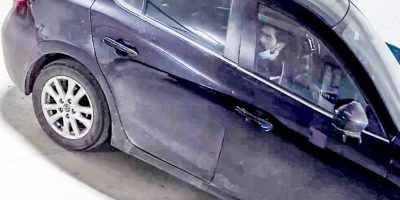 York Regional Police said on Friday that they are looking for two suspects in connection with the abduction of a woman in Wasaga Beach.

Police say on Dec. 20, 2021, officers responded to a residence in Richmond Hill for a call that a woman was assaulted with a frying pan in an underground parking garage.

The victim was taken to hospital with non-life-threatening injuries.

Two males fled the scene in a vehicle.

SUSPECTS SOUGHT FOLLOWING ASSAULT IN RICHMOND HILL- 2 suspects sought after a woman was attacked in a parking garage on King William Cres on Dec 20. This incident is connected to the abduction of Elnaz HAJTAMIRI. Please call if you can ID the suspectshttps://t.co/uEpKsezb3z pic.twitter.com/HATOtbqnzJ

Through their investigation, police determined the vehicle used in the assault had been stolen from Toronto.

It has since been recovered and an image was released by investigators.

On Friday, police identified the woman in the incident as 37-year-old Elnaz Hajtamiri, and confirmed she is the person who was abducted from a home on Trailwood Place in Wasaga Beach on Jan. 12.

At the time, OPP said Hajtamiri was taken from the residence by three men wearing fake police uniforms, and a person tried to call 911 but was overpowered by the suspects.

Both suspects in the assault investigation are described as being between 25 and 34 years old.

One suspect is described as 6’2″, with a medium build and short brown hair. He was wearing a surgical mask, a camo, puffed jacket and dark pants.

The other suspect is described as being 5’10”, with a medium build, wearing a dark hooded jacket and surgical mask.