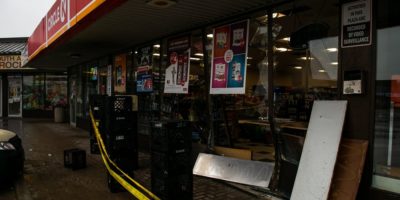 A 16-year-old girl has an appointment with a judge after a north end crash in the wee hours of Thursday.

Barrie Police were called out to a Circle K store at the corner of Grove and Johnson Streets around 1:30 Thursday morning with reports a vehicle had struck the storefront before fleeing the scene.

Officers showed up and noticed a trail of broken glass leading away from the scene, providing a trail to follow to a suspect. Police located the suspect vehicle a short distance off, and say the teenage girl behind the wheel now faces charges of Fail to Remain and Take Auto Without Consent.

A passenger in the vehicle was not charged, and there were no injuries reported.