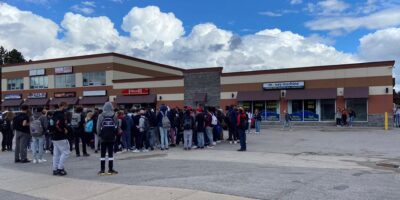 A crowd of kids was spotted across the street from a south Barrie high school, violating the province’s cap of 25 in outdoor gathering sizes. A Barrie Police official says this could get very expensive for some students.

“Any gathering where there’s 25 or more, could result in charges being laid,” said Barrie Police Service spokesperson Peter Leon. “Certainly we would be looking at the fact if they’re wearing masks or not.”

Leon says the province has been clear on this. “People are certainly aware of that it’s a topic that has been in the news every day this week, we’re continuing to see those numbers increase,” he told Barrie 360. “If they’re in close proximity, and they’re not wearing masks, the legislation is there under the Reopen Ontario Act, where you could be charged. The fine is $750 plus $125 surcharge.”

One youth at the gathering told Barrie 360 the crowd was there to watch a fight between two students. The crowd is estimated to have contained 50 to 75 people.

According to Leon, the responsibility here lies with the student and not with any school or school board. “The students are probably on a lunch hour. I know other schools have rescheduled students’ days so that they have a lunch break at the end of the day.” For many high school students, the school day ends in the early afternoon.

Dr. Charles Gardner, medical officer of health for Simcoe and Muskoka, said earlier this week there is no way schools or school boards could force students to stay on school property. “We are talking about people who are, in some instances, age of majority and other instances approaching that. And it would be very hard to prohibit them from leaving the school premises,” he said. “One approach would be to instead, in addition to encouraging them to stay, educate them about the importance of maintaining physical distancing.”

While police attended the scene, Leon wasn’t immediately able to say how many, if any, tickets were handed out.