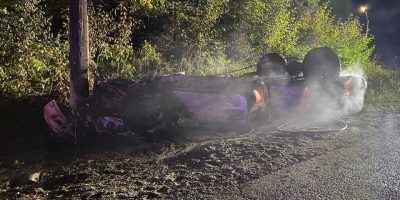 Five young people are lucky to be alive, let alone no serious injuries after a pickup truck slammed into a hydro pole in Tiny Township.

First responders were called around 3 a.m. Friday to a report of a vehicle that struck a pole and caught fire on Tiny Beaches Road South at Algonquin Boulevard.

Police say a northbound pickup truck left the road, flipped and struck a utility pole, and then caught fire.

All five occupants aged 15 to 19 years from the Greater Toronto Area were able to get out of the truck suffering only minor injuries.

An 18-year-old male from Caledon Village has been charged with impaired driving.