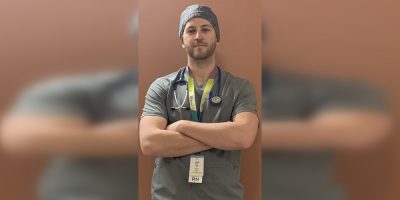 Kiel Ferguson is tired. He’s worn out. He’s been working in the ICU since the start of the pandemic and knows that some people aren’t seeing the big picture.

Through sheer bad timing, the Barrie native found himself exiting nursing school and entering the Intensive Care Unit at Michael Garron Hospital in East York just as the world was learning about COVID-19. Since then, he says it has been a consistent battle against the disease, one he fears is going unseen by some members of the public.

While Kiel says he feels burnt out and that there’s no end in sight, others would tell him hospitals aren’t as busy as is the claim. “It’s obviously not true and the individuals that are sharing this information clearly aren’t in the hospital,” responds Kiel. “I think of my hospital in particular; We have, at any given time, 50 to 60 patients admitted with COVID-19. My hospital also is having problems with their oxygen distribution. We are functioning at 170%, meaning that we have so much oxygen requirement that we can’t meet needs if we needed to admit more patients.”

With the hospital’s resources taxed to the point where it cannot meet the needs of patients, Kiel says that means some patients have to be sent elsewhere for care. Moreover, the province is quickly getting to the point where health officials have to decide who gets care and who does not. “It’s called the mortality rate and if they (the patient) fall under 70% mortality rate, or 70% chance of survival, then they will not be offered critical care services,” Kiel admitted. “That goes directly against my main purpose of becoming a nurse, and I never thought I would ever have to deny a Canadian citizen their right to receive critical care services.”

While Kiel and his healthcare peers could soon be forced to make these difficult decisions, others are gathering en masse to protest government-imposed restrictions, potentially contributing to the spread of the disease as well. Kiel says these folks need to look past what the virus is doing to the individual and start looking at what it is doing to the province. “I think one of the driving factors of (these protests) is the survivability rate of COVID-19,” Kiel explained. “The fact that there’s a 99% survival rate isn’t the point. If you keep having admissions into critical care services, there’s a point where we have to take drastic measures.”

“With this new wave, we’re seeing younger individuals constantly. I’ve had people younger than myself, and I’m 27,” he continued. “To see someone, you know, 20 to 25, struggling to breathe, and in probably the worst shape of their lives, it’s horrible to see.”

“I feel burnt out. I feel like it’s just ongoing, and there’s no end,” he added. “I’ve had many colleagues leave the ICU just because they can’t handle it anymore. They’re so stressed out, they need to think about their own mental health and their own physical health at that point, or else they’re going to suffer in other ways.”

Adding to all that, Kiel has begun to notice some complacency among those who have gotten their shot. “Just because you have the first dose, don’t be naive in thinking that you’re immune; you are not immune, you still need to follow public health measures,” he stressed, adding he hopes the province will soon look at reducing the interval between vaccine doses. “I’m very lucky to say that my dad and my mom both have received the first dose of the vaccine, but I’m still scared for their health.”

While he has been dealing with day-to-day pressure and the potential for burnout, Kiel says one positive is the people he works with. “We’ve essentially all come together, this has definitely made us a lot closer. We all have the same understanding that we need to work together as a team to be able to get through this,” he concluded. “We all have our skill sets, whether that’s working, or inserting IVs, or general knowledge-wise. You know, we work to those strengths. And together, we make a pretty damn good team, honestly. And it’s amazing to see.”

As of Friday, May 7, Public Health Ontario reported 858 ICU beds being occupied by COVID-19 patients alone, in addition to a host of other patients receiving critical care for reasons unrelated to the coronavirus.