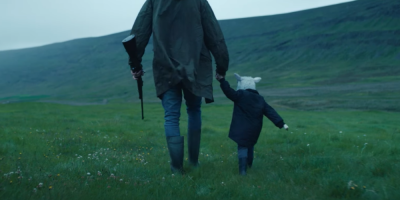 It’s no secret we’re fans of A24 (and you should be too) and their newest trailer for Lamb is as weird as it is intriguing.

A24 is known for making horror movies that don’t exactly stay on the beaten path. Films like Midsommar, The Witch, Hereditary, and The Lighthouse aren’t exactly what you would call “traditional” but have all gone on to garner critical and commercial praise as a few of the best horror movies ever made.

Lamb looks to continue this legacy with the usual mix of phenomenal acting, excellent directing, beautiful cinematography, and strange (emphasis on strange) story. Set in Iceland, Lamb will follow the story of a childless couple who discover an unnatural newborn in their sheep barn. The couple decides to raise her as their own, but dark forces are determined to drive the creature back to the wilds from which it came.

The film will be Valdimar Jóhannsson’s first time in the director’s chair and will star Noomi Rapace (The Girl With the Dragon Tattoo) alongside the relatively unknown Bjorn Hlynur Haraldsson.

Featured image courtesy of A24 via YouTube.com