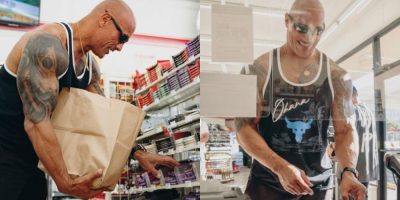 Dwayne “The Rock” Johnson’s conscience is finally clear decades after he stole Snickers bars from a convenience store.

He recently posted a video documenting him making good on his old crimes.

In the video, he visits a 7-Eleven in Hawaii, explaining he would steal a king-size Snickers every day when he was 14 as a pre-workout snack.

“The same clerk was there every day and always just turned her head and never busted me,” he said.

His video showed him returning to the store decades later and clearing the shelf of the chocolate bar.

He also paid for the other customers. Before he left the store, he left the sack of tasty treats with the clerk saying, “If anyone comes here looking like they’re stealing Snickers, give them these.”

He added, “I finally exorcised this damn chocolate demon that’s been gnawing at me for decades.”

Great, now I have to travel to my home city and pay for the rockets candy I stole when I was 6.

Watch him make amends in the video below.