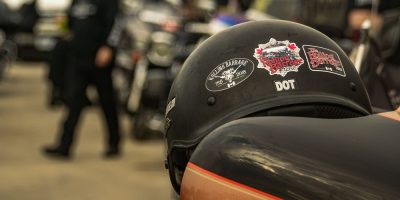 An annual cross-country motorcycle ride to raise awareness of PTSD among first responders and military veterans rolled through Barrie on Tuesday.

The Rolling Barrage Coast to Coast Ride to Combat PTSD made a pit stop in Barrie overnight, taking a rest on the trip from Halifax, NS to Vancouver, BC. Paul Harman is the National Executive Chairperson for Rolling Barrage, and he explained why they’re making this journey. “Our goal is to elevate the level of care for the first responder, military veteran community, as well as to get the stigma of PTSD trounced,” he told Barrie 360 while enjoying a pre-trip breakfast at Currie Heavy Towing in Midhurst. “If you’re hurt from the work that you’ve done protecting Canada, then we’re here for you, and we ride for you, this isn’t about us, this is about you.”

“There are people on this ride that live with PTSD, some struggle with it, we want to start focusing on the living part, and helping them get better care,” Harman continued. “Essentially, that’s why we’re here, to raise awareness, to end the stigma, and raise funds to help get them in proper treatment that they need and elevate that level of treatment to get a better level across the playing field.”

This year’s trip represents the fifth annual Rolling Barrage. It began on August 2, and they hope to arrive in British Columbia by August 21.

Registered riders can join in at any point along the route, while anyone wishing to make a donation to the Rolling Barrage can do so through the organization’s website.