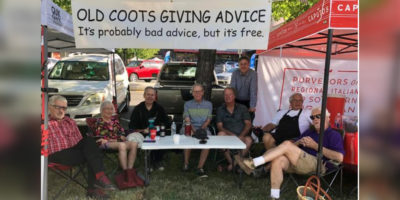 Here at Tony Caputo’s Market and Deli in Salt Lake City, like at delis and donut shops across America, there is a group of regulars — senior citizens who sit at the same table, sip a single cup of coffee and proceed to know-it-all.

This group, led by Tony Caputo himself, has been bloviating for years.

“We solve the problems of the world,” said one.

And what a shame that all that wisdom, all that good coffee klatch advice basically goes to waste — that no one listens to them, but them.  Until now.

Now, every summer Saturday, they take their coffee club to the local farmer’s market. Under the banner “Old Coots Giving Advice” they basically do what they’ve always done.

They never expected anyone to really stop.

“Actually, it was more of a joke,” one said.

“And lo and behold,” said another.

“One person, then 2 persons, then 3, and then they formed a line,” said a third.

And that’s how the Old Coots became one of the most popular booths at the market. Today, they address everything — from landscaping issues to life’s greatest mysteries.

If some of this sounds like bad advice, that’s because it often is. In fact, there’s a disclaimer right there on the sign.

“But a lot of the advice columnists through the last decades, what qualification did they have?” one asked. “And sometimes I think, for all of us, we hear a question and we go, ‘How are we going to answer that?'” Another said.

Like one woman — who asked if you should stay with a husband who isn’t faithful.

And they say that’s the biggest surprise: the number of young people especially, who come up in all seriousness.  This new mom wanted advice on how to not mess up her kid’s life.

“You’re going to mess him up a little bit and that’s how they grow,” they said.

And those little pearls, those winks of wisdom — they did seem to help people.

If you can’t find one at your farmers market, they’re usually available wherever coffee is sold.