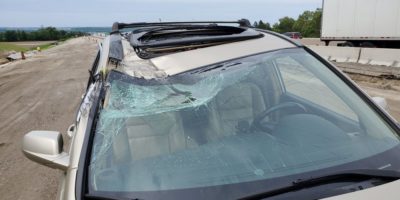 A lane of traffic was blocked on the 400 Wednesday afternoon amid reports a third vehicle has lost a wheel.

It is said a transport truck heading south on the 400 lost one of its wheels as it approached Highway 9. The wheel reportedly bounced in the southbound lanes only, striking another transport truck and several other vehicles. OPP Sgt. Kerry Schmidt says there were no reports of any injuries in this incident.

The driver of the SUV is lucky to be alive after a set of wheels came off of a transport truck on #Hwy400 SB at #Hwy9 #OPP investigation ongoing…#CheckYourNuts pic.twitter.com/zAgkEhX5Ip

This comes a week following an incident on the 400 at Highway 89 that sent a Barrie woman to hospital with serious injuries. Another report of a lost wheel came two days later, again, on the 400 near Highway 89.