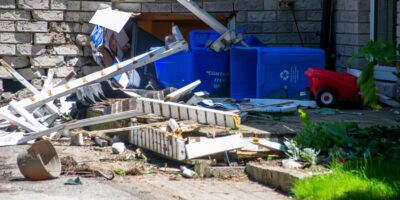 Police say two of four suspects are on the lam after a pickup truck rammed the front of a home on Barrie’s Leacock Drive. One suspect was scooped up shortly after the incident, another arrested over a week later.

The collision happened just before noon Tuesday; the vehicle struck a tree as it left the roadway, and then dodged a car parked in the driveway to strike the side of the building. All four of the vehicle’s occupants allegedly fled the scene from there. One was immediately taken into custody, but despite a thorough search by the service’s K9 unit, three others remain outstanding.

A 42-year-old Gravenhurst man, said to be a passenger of the truck, is facing weapons and drug-related charges. Barrie Police announced on June 18 the suspected driver was arrested and faces charges including impaired and dangerous driving, and driving without a licence.

There were no injuries reported by residents or pedestrians nearby.

“It’s very fortunate nobody was in the way, they couldn’t have gotten out of the way in time,” said Barrie Police spokesperson Peter Leon. “It happened that fast.”

Leon says the truck was not reported stolen but is registered to an address in Peel Region. The vehicle was not being pursued by police prior to the collision, and the cause of the crash remains under investigation. Leon indicates it was travelling well above the posted limit at the time of the collision.