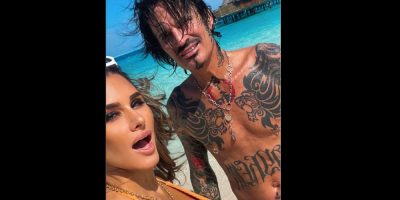 It’s no secret that Tommy Lee is one of the most “gifted” people in Hollywood.

Still…fans who follow him on Instagram got an eyeful yesterday after the Motley Crue drummer posted a full-frontal nude pic. The photo showed his tom-tom drums, stick and all.

It was deleted a short while later as Instagram doesn’t allow nude photos on its platform.

However, there are exceptions for breastfeeding pictures, post-mastectomy scarring, and nude paintings.

That latter could explain why Tommy posted this shortly after his original pic.

One follower responded to the artwork with, “Tommy, I’m going to ground you, so you can’t have your phone for a couple of weeks.”

He’s been very active on social in the last day, with many people worrying about his erratic behaviour.