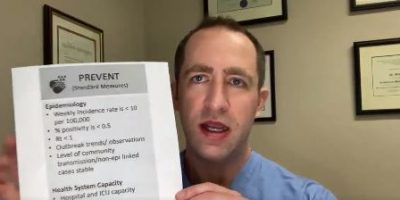 A Toronto doctor thinks it was irresponsible for Ontario’s top doc to say he hopes the entire province can be in the COVID Green Zone (the most lenient code in the COVID-19 framework) by Christmas.

“We can get these numbers down as we did before, and bring them down to a level so you move from the red to the orange, yellow and I would like to think everybody would be in green, especially for the time of Christmas,” Ontario’s Chief Medical Officer of Health Dr. David Williams, said Monday.

Dr. Williams is hoping all of Ontario will be in the Green/Prevent level of restrictions by Christmas. @ONgov own data show this is impossible. pic.twitter.com/SO9bg6eSRu

Dr. Michael Warren, Medical Director of Critical Care at Toronto’s Michael Garron Hospital, says that statement could lead people to believe we’re in a situation that’s far different than the reality we are in, “ICU admissions are increasing, hospitalizations are increasing, deaths are increasing. Percent positivity is around five percent. Cases per hundred thousand exceed a hundred in one of our public health regions, and contact tracing isn’t occurring to a significant degree in one of our biggest public health regions. So, how is it possible that we could come close to approaching the Green Zone.”

Even looking at the province’s own projections (models suggest as many as 6500 new cases a day by mid-December) Warren says it would be impossible for the entire province to be in the Green Zone.