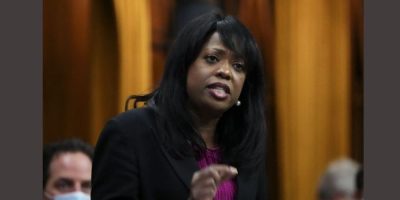 Lewis confirmed her candidacy in a 45-second video shared on social media Tuesday and emailed supporters asking for help to collect the 500 signatures she needs to officially enter the race. She also launched her campaign website with a link to purchase memberships to support her and make donations.

“I’m running to lead our party and our country based on hope, unity and compassion,” Lewis wrote on Twitter.

She is the second official candidate in the race, following Ottawa area MP Pierre Poilievre who announced his candidacy last month just days after Erin O’Toole was voted out of the leadership by the Conservative caucus.

Former Quebec premier Jean Charest has scheduled a campaign launch event in Calgary Thursday where he will formally announce his candidacy.

Lewis, a former Bay Street lawyer, ran in the 2020 leadership contest as a relative unknown. She finished third behind O’Toole and Peter MacKay, a former Tory cabinet minister who led the Progressive Conservative party before it merged with the Canadian Alliance in 2003.

She pulled a lot of support from the party’s social conservative wing and from members of its base in Western Canada.

Lewis was elected as an MP just last fall in the rural southwestern Ontario riding of Haldimand-Norfolk. She immediately found herself on the backbenches without a place in O’Toole’s shadow cabinet. That omission drew the ire of the party’s social conservative wing.

She has been a vocal critic of COVID-19 vaccine mandates and a Liberal campaign promise to revoke the charitable status of anti-abortion pregnancy centres.

She recently threw her support behind a private member’s bill brought by Alberta Conservative MP Garnett Genuis, which seeks to offer protection against discrimination based on political beliefs.

This report by The Canadian Press was first published March 8, 2022.

Conservative member of Parliament Leslyn Lewis rises during question period in the House of Commons on Parliament Hill in Ottawa on Thursday, Dec. 2, 2021. THE CANADIAN PRESS/Sean Kilpatrick