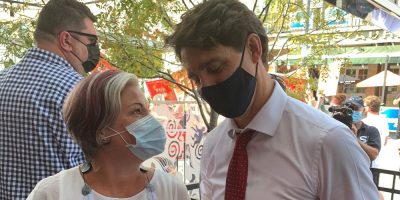 Trudeau’s visit to a restaurant in the city’s downtown came following a morning visit in Markham, at which he made a campaign promise affecting families across Canada. Trudeau vowed that a re-elected Liberal Government would reduce fees for child care by 50 per cent in the next year, and deliver $10 a day child care within five years.

Meanwhile, Conservative Party Leader Erin O’Toole said his party would bring about a GST Holiday. He said a Conservative Government would implement a month-long break from GST this December, meaning all retail purchases would be tax-free for a month.

“It’s getting harder and harder to afford the basics – food for the family, gas for the car, clothes for the kids,” said O’Toole. “And it will only get harder this fall. As Canadians look forward to getting to spend more time with their families, they also know that the holiday season is an expensive time of year.”

NDP Leader Jagmeet Singh was in Vancouver, BC to tout his party’s job creation plan. Singh promised an NDP government would invest in local jobs and companies, giving them priority over multinational corporations in rebuilding the Canadian economy.

Canadians go to the polls on September 20.